Windels Marx has one of the largest community Banking practices in the region. Our clients range in size from recent start-ups to those with several billion in assets, and from closely held Subchapter "S" banks to publicly traded institutions.

We represent our financial institution clients before all state and federal regulatory agencies, including the Federal Reserve, the Office of the Comptroller of the Currency (OCC) and the Federal Deposit Insurance Corporation (FDIC). We provide advice on general regulatory compliance, assist in negotiating and complying with regulatory enforcement actions and guide clients through the process of obtaining regulatory approvals for various transactions. Historically, we have been active in working with investor groups seeking to obtain de novo bank charters, guiding them through the regulatory approval and capital raising process.

We assist our clients in complying with federal and state securities laws, both on an ongoing basis for those clients whose securities are publicly traded and in connection with capital raising transactions. For those clients that are subject to the Securities Exchange Act of 1934, we prepare and review periodic reports, assist with Section 16 compliance and generally provide advice on disclosure and compliance issues. On capital raising transactions, we will work with our clients to ensure that the transaction and disclosure documents meet all legal and regulatory requirements applicable to the client, whether they are subject to the Securities Act of 1933, OCC regulations or general anti-fraud requirements.

Our merger and acquisition practice assists both buyers and sellers in a variety of transactions, including traditional mergers, stock purchases, recapitalization transactions and asset/liability purchase and assumption transactions. In representing our clients, we assist in the diligence process, negotiate and draft definitive deal documents and represent our clients in the regulatory approval process, preparing and filing any necessary applications and responding to regulatory comments and concerns.

For many of our community banking clients, we serve as an outside general counsel, providing general corporate services, such as contract review and negotiation, advice with regard to compensation plans and employment agreements, and advice on corporate governance issues, including Board and committee structures and policies and procedures.

Other Banking Matters of Note

New York Law: Should Lenders Hold Both Equity in Borrower and a Mortgage as Collateral Security? Is There a Defense to an Article 9 Sale of the Equity Interests in the Borrower and Are the Related Loan Documents Void? - Jul 24, 2020 COVID-19 - The CARES Act: The Main Street Lending Program - Apr 16, 2020 COVID-19 - The CARES Act: SBA Sec. 7(a) Paycheck Protection Program Loans and Loan Forgiveness - Apr 9, 2020 COVID-19 - Summary of the Revised Interagency Statement on Loan Modifications and Reporting for Financial Institutions Working with Customers Affected by the Coronavirus - Apr 8, 2020 COVID-19 - NJ Legislature Bill To Assist Small Businesses Clears Senate - Mar 19, 2020 The JOBS Act - Impact on Community Banks - Mar 29, 2012 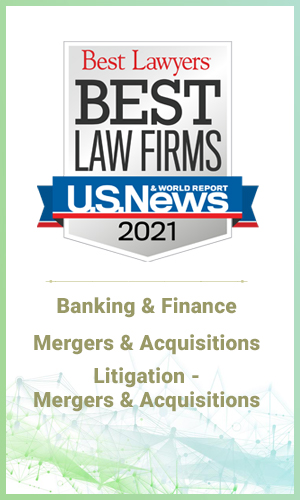 __
For 2021, Windels Marx is ranked in the National Tier 3 and Metropolitan Tier 1 (New Jersey) categories for Banking and Finance Law. In addition, we are ranked in the Metropolitan Tier 1 (New Jersey) categories for both Mergers & Acquisitions Law and Litigation – Mergers & Acquisitions. Visit the Best Law Firms directory and learn more about Windels Marx recognition.