Through our representation of numerous foreign banks and the increasingly international nature of our banking clients' customers, we have developed extensive skill in cross-border financing. Our services range from structuring transactions to take full advantage of different tax regimes to negotiating the intricacies of lien creation and perfection with respect to assets located all over the world.

To serve our clients internationally, we serve the U.S. interests of global banks and financial institutions. In addition, we have also developed strong working relationships with numerous foreign firms comparable to us in size, experience and approach. Like us, many of these foreign firms are members of the Alliance of Business Lawyers, a highly regarded network of mid-sized business law firms that spans the globe. 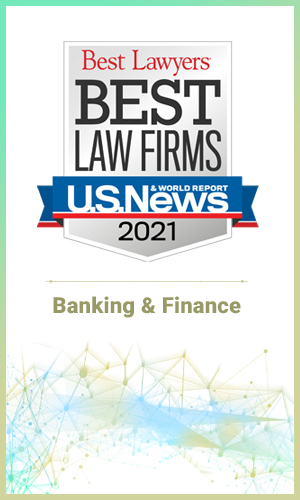 __
For 2021, Windels Marx is ranked in the National Tier 3 and Metropolitan Tier 1 (New Jersey) categories for Banking and Finance Law. Visit the Best Law Firms directory and learn more about Windels Marx recognition.